Do you avoid confronting those who have wronged you? What is the relationship between forgiveness and trust? How do you start to forgive people who’ve hurt you?

In this podcast episode, Melissa Vogel speaks to Derek Stone about his book ‘Why Should I Forgive?’ and how to work through the pain in your past, forgive those who caused it, and move on into your future. 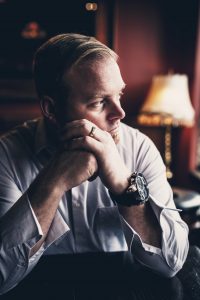 Derek Stone is the Founder and Chief Executive Officer of Stone’s Repair and Remodel, LLC. He’s been married to his high school sweetheart, Crystal for the past 17 years, and together they have two boys: Ashton, 14 years old and Noah, 7 years old.

Derek came from humble beginnings and grew up in Section-8 housing located in Mobile, AL.  Derek has a fraternal twin brother and was the youngest of 4 children growing up. His parents divorced when he was 5 years old and had to raise himself when his mom started working 3 jobs to keep the lights on. He moved to North East Mississippi at age 16 when his mother re-married for the 3rd time and started his life over.

Derek was a struggling musician, turned general contractor who grew his business to over a million dollars in revenue in 3 years. He attributes his journey to success to 1 choice that he made to forgive his dad. Author of the book Why Should I Forgive.

How the book came to be

Derek had always felt that God had given him a message to share and he was using music as his platform for that, so when that failed and he stopped performing, he felt really depressed. In the search for another platform to share that God-given message, he decided to write a book. At one point, he found himself writing about how, when something hurts, you have to get over it to truly move on from it emotionally.

He anticipated a lot of backlash and criticism for that, so he put the book on hold. Later, when two of his mentors-turned-friends (Tommy Breedlove and Tom Schwab) told him that if he truly believed what he had been writing then he should pick it back up, Derek knew that there would always be a critic lurking somewhere and he wasn’t going to let that stop him from writing his book.

So many of the experiences you have as a child and as a teenager go on to affect you later in life, sometimes even for the rest of your life. But you can deal with your past, use what you’ve been through, and it can motivate you to make some necessary changes in your life. This is an exercise for dealing with those feelings about confrontation:

When you forgive someone, you’re by no means justifying what they did to you, but you’re allowing yourself to move on to a better place. Forgiveness is a choice, and it is a choice that you make in order to let go of those in your past who have wronged you. A big mistake is when people hold out on forgiving someone until that someone is “worthy” or “deserving” of forgiveness, which is never going to happen. You shouldn’t wait for them to earn your forgiveness, as true forgiveness is when you give it away freely, so you need to make that choice and forgive them.

It is important to mourn and to feel those feelings when you’ve been hurt, offended, betrayed, etc. The cornerstone of this is understanding that your life is your own, and you need to take responsibility for your own life. Journaling, can help you address your feelings and understand that what you’ve endured actually matters. This helps you to get to a place where you realize that you can’t go back and you can’t change the past, so you need to accept what happened to you, mourn whatever you need to mourn, forgive whomever you need to forgive, and move forward as best you can.

What happens when you start forgiving people

Your mind and your heart only have so much capacity for so many things. And what you’re doing is you’re freeing up your heart and your mind to open up. You’re setting yourself free to move on to a better place emotionally.

It’s important to remember that forgiving someone does not minimize the seriousness of what they did to you and it does not invalidate your experience, but harboring that pain and anger and bitterness really does hold you back from moving on to a better life.

The steps to forgiveness

Wanting and needing a better life

You need to take responsibility for your own life and actively pursue those things that would give you a better life. One of those things is choosing to forgive people and to move on from the bad things in your past.

Going with your gut

If you’re starting on this journey and there’s already someone you’re thinking of, that’s your gut telling you that you need to forgive them. It’s also important for you to look around at the people in your life and listen to what your gut is telling you about how they treat you.

This is where you define exactly what you want and need to improve your life (step 1) and use that definition to make informed decisions, and also to eliminate the critic within yourself. Derek explains that you need to fire them and then hire them back but as a coach, instead. This is a huge shift in your mindset where you allow yourself to see the good times, the bad times, and to see your own potential just as a good coach would.

Surrendering the outcome to a higher power

When you want to have revenge on someone that has hurt you, choose to forgive them and surrender the situation over to God. If the battle is too big for you to handle and when you’re feeling overwhelmed, helpless, and hopeless, ask God to take over and trust Him to fight it for you.

Be grateful for the difficult experiences and the tough times. Understand that they are often necessary for you to experience so that you can change your life for the better.

Three things that men need that women should understand

1. They want to go on a great adventure

2. They have the battle to fight

3. They have a beauty to rescue

Three things that women desire that men should understand

1. They want to be pursued/romanced

2. They want to have an irreplaceable role on a great adventure

3. They desire to show the world what beauty looks like through their eyes

Welcome to my life, my world, my passion. I am a wife, mom, personal trainer, entrepreneur, business owner, actress, fitness coach, and instructor. My ... END_OF_DOCUMENT_TOKEN_TO_BE_REPLACED