In this podcast episode, Melissa Vogel talks to Dr. Alex Denes and April Turner about collagen, how the skin works, and their CO2 laser treatments. 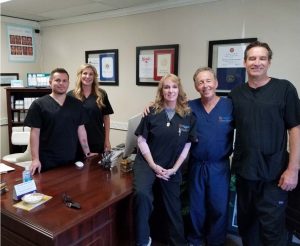 Canyon Lake Med Spa is conveniently located between the 15 and 215 freeways on Railroad Canyon Road in the Canyon Lake Town Center. The office is owned and operated by Alex Denes M.D. and April Turner R.N.

The Medical Aesthetic treatments and preliminary surgical consults are performed by April Turner, R.N. April is a highly trained, medical aesthetic specialist. April has worked in the Medical Aesthetic field for over five years and has performed over 15,000 documented injections and is enthusiastic about sharing her knowledge and experience when training other health care providers in her field.

The only FDA approved topical agent that increases collagen production over a 12-month period. After 12 months, you maintain the collagen that you produce.

Markedly increases your collagen production very quickly. April herself has had 6.5 of these procedures whereas most patients will get it done every three to four years. The downtime can be substantial (a week or two) but nothing else will give you the same kind of results.

Who should start getting Co2 laser and at what age

What is CO2 laser?

Unlike regular light, lasers are a cohesive beam so are very controllable. Lasers have been around for a long time but over the past several years, they have adapted machines to allow them to be used in a cosmetic way. Basically, what they are doing with the laser is a controlled burn. It has different settings that vary from very light to very deep depending on what the patient wants. They do two things with the laser:

Resurfacing – Your skin is made up of basically three layers, the top two of which are:

Collagen stimulation – If your skin is the sheet on a bed, your collagen is the mattress.

It’s very important. You can make the sheet as tight as you want but if the mattress is lumpy, the sheet is going to be lumpy. In the center of the ring portion of the laser, there is a “spike” that goes deeper into the dermis and punches holes in the collagen. This purposefully damages it so that when the collagen heals, like when your skin heals and a scar develops, it contracts and tightens, and causes the skin to tighten as well.

If they go full bore with the treatment, recovery is 10-14 days. The second or third day is the worst, that’s when you are very red and you’re peeling Once the peeling is gone, usually five or six days later, then you’re just deeply red (erythema) because it is inflammation from an injury and that erythema slowly goes away after another five to seven days. Right after the treatment, you have to put on a product called Aquaphor (like a water-soluble Vaseline) which is an artificial skin barrier that protects you until your own skin comes in, so you’re very shiny for several days.

The strength of the procedure determines how much, if any, anesthetic has to be given. If they go full bore with the laser, most patients are most comfortable asleep as it can be painful. A lot of it has to do with tolerance but if they’re doing a full-blown treatment, which usually takes about an hour, they will do a moderate/IV sedation, not a general anesthetic. You’re not paralyzed, you’re not intubated, you’re breathing on your own, you’re kept as deep as you have to be in order to be comfortable. This is a much safer form of anesthesia and it’s usually April’s husband, Michael, who does this. Patients are monitored very carefully, many times the anesthesia is light enough that they can actually talk to them. Many procedures, like the feathering, don’t require any IV sedation at all, they just use a little topical anesthetic.

The Co2 laser can be done in whatever area bothers you:

The neck and chest are much more sensitive to the laser than the face so they have to use completely different settings but the CO2 can take out a lot of that discoloration.

CO2 laser as not a fully covered alternative to a facelift. A facelift will make you tighter and smoother but it is much more expensive, there’s much more downtime, there’s scarring, and the recovery time is much longer. Dr. Denes has had a facelift and he would personally never do it again, he would just get a Co2 done, we now have that as an option. There are still people who are going to want a facelift but Dr. Denes thinks that most people nowadays are looking for less invasive procedures.

CO2s are not totally risk-free procedures. The biggest risk that they have, which is totally avoidable, is the sun. If you go into the sun right after, or within four or five days of laser treatment, you will get hyperpigmentation and then will have to have another procedure done to get rid of that. When people are planning for their procedure, that’s one of the things they have to think about is we want total avoidance of sun and that includes sitting next to a window inside your home for several days because it is going to get splotchy if you get some exposure on it.

When you see the results

This is a more superficial procedure, like getting a chemical peel. Unlike the chemical peel that can leave you flaking and peeling for up to two weeks, the CO2 feathering gives you a downtime of only three or four days. It gives you not only the new skin/cellular turnover/regeneration of the epidermis, but it also gives you a smoother appearance and you recover so much faster.

If you visit their offices and mention that you heard about them on this podcast, April will give you a free microdermabrasion and chemical peel!

Welcome to my life, my world, my passion. I am a wife, mom, personal trainer, entrepreneur, business owner, actress, fitness coach, and instructor. My ... END_OF_DOCUMENT_TOKEN_TO_BE_REPLACED