Is fitness a priority in your life? How important is mindset when it comes to fitness? What can you do to overcome your obstacles before they overcome you?

In this podcast episode, Melissa Vogel talks to Chad Austin about making fitness a priority, how to do it, and why it’s important. 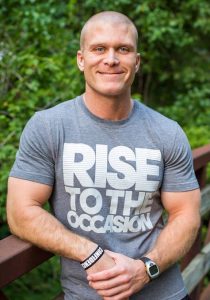 Chad Austin is a personal trainer, speaker, and the owner of Priority Fitness in Overland Park, Kansas. Priority Fitness’s name was inspired by his best selling book, Make Fitness A Priority: How to win the fight against your excuses. Chad was inspired to focus his speaking and writing on long term health after seeing so many people reach their short term fitness goals only to fall back into bad habits.

Chad is passionate about helping people who can’t find time for fitness to learn how to stop making excuses, so they can make it a priority in their lives. He expertly helps steer people away from the desire of instant gratification and helps them make changes that lead to long term fitness, not just temporary success.

How “Make Fitness a Priority” came about

The purpose of our job is to help people get long term success.

Chad is an author but sees himself more as a “speaker who writes” and says that it is more about the message than the writing. Before writing his book, Chad did an online poll asking people what their top priorities in life are. The top answers he received were family, career, and faith… never health and fitness. The reason that fitness doesn’t come to mind is that it is always the thing we plan on getting to later. The problem with that way of thinking is that all of the obstacles and challenges, that we use as excuses to put off fitness, aren’t going anywhere. There’s always going to be excuses that we use to skip workouts or validate going through the drive-thru. If we don’t realize that, then we will never get anywhere.

So, when the going gets tough, you need to know why you’re doing it. Helping yourself dig a little deeper, helping yourself recover anytime you fail, and not beat yourself up but just get back on track, and helping yourself overcome the biggest excuses that we make whether it be I’m too tired, I’m too busy, I’m too bored. All these top excuses are just giving you, not just calling them out, but giving you solutions going forward and how you can overcome them.

Chad has included “mindset” in his training as this is a huge missing component in the fitness industry. A lot of the mindset work in Chad’s book is goal setting where you have to dig a little deeper. Finding people’s “why” is a big part of it. When the workouts get tough, if you don’t know why you’re doing it then you’re not going to keep doing it. Mindset is a huge piece of your fitness puzzle, you can’t just rely on motivation.

The Fit List Test is a quick mental exercise that people can use to overcome the biggest excuse that we have which is that we don’t have enough time. The fit list asks four questions:

It’s a realization exercise that shows people that no one has it easy. No one is making fitness a priority in life because it is easier for them than it is for you. Everybody has obstacles and we always will, it’s just that those obstacles may change over time. There are always going to be obstacles in our way that we could let overcome us instead of us overcoming them if we want to. The biggest solution to “I don’t have time” is to schedule.

Setting the bar too high

A lot of times when people say that they don’t have time to work out, what they really mean is that they don’t have time to work out like they used to. Life changes, we grow up and get more responsibilities so maybe it doesn’t make sense to work out like we used to. We set the bar at the point where we were in the best shape of our lives and it’s almost like we’re ashamed if we do less and it won’t be worth it if we do less, and this is the completely wrong way of thinking. What you do for fitness has to fit into your life otherwise it won’t be in your life for very long. You can’t compare what you used to do then, you’re never going to live that life again. This is your new life, now adapt. It doesn’t make it less of a priority, it just makes it different.

Red flags to look out for with new fitness programs?

If you’re wanting long term success and want to get off the rollercoaster, these are two red flags that are going to lead you to just temporary success:

Get your FREE copy of the Bestselling & Award-Winning Book!

Welcome to my life, my world, my passion. I am a wife, mom, personal trainer, entrepreneur, business owner, actress, fitness coach, and instructor. My ... END_OF_DOCUMENT_TOKEN_TO_BE_REPLACED