Do you want to lose weight? How can you turn your goals into affirmations? What can you do to get through the bad days?

In this podcast episode, Melissa talks to Adam Schaeuble, PHD (Previously Heavy Dude) about his weight loss journey and his Million Pound Mission. 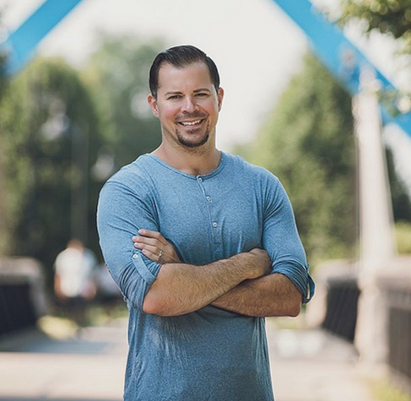 Adam Schaeuble aka The PHD (previously heavy dude) hit a rock bottom moment in his life where he weighed 327lbs. He then went on his own 100lb weight loss journey and as he was on this journey he started to inspire people in his home town to join him. He started a gym and a boot camp program and helped his home town lose over 35,000 lbs in five years. Now he’s the host of the top-ranked health podcast The Million Pound Mission where his goal is to inspire one million pounds of healthy results.

Adam is known for helping women (and a few men) over the age of 30 that are super busy being employees, entrepreneurs, partners, friends, and moms. These are the people that tend to put themselves and their health last on the priority list and Adam teaches them how to escape the Black Hole of Weight Loss Doom which is where most people get trapped in the vicious cycle of losing weight and gaining it back over and over again.

Adam impacts his community by teaching them his 7 Necessary Steps For Long Term Weight Loss Success that has produced a total of 55,000 lbs of results for his clients and community members so far.

Adam grew up as an athlete and studied Exercise Science in college. After getting involved with Highland Games, Adam started eating more in order to gain weight and get bigger. This resulted in food addiction, blood pressure issues, low endurance levels, and low energy. Adam became a strength coach for high school kids but wasn’t happy. He blamed everything else and learned that he needed to point the finger at himself in order to make a change. After watching The Secret, Adam sat down and mapped out what he wanted his life to look like 5 years from that date.

Take action and do something everyday!

After reaching rock bottom in 2007 at 327lbs, Adam took responsibility and started to own his situation.

I didn’t just sit back and use the law of attraction. You can’t spell attraction without action. I took action every day and that is what made the big difference for me.

Despite there being so many ups and downs Adam used the affirmation process as his guiding star.

Getting on other people’s shows was the way to promote his own podcast. Adam knew that he would rock one of the top podcasts in health and wellness but the host would only interview doctors. Listen to the podcast for the rest of this hilarious story.

When we can’t be at our best, we can still do our best.

Adam has a process that he calls the black hole of weight loss doom which is when we embark on a new program, whether it’s a fitness program or a new diet, we all go through the same cycle. We start out feeling really excited, then we begin seeing results and feel fired up. And then we have a “life happens” moment, we’re not ready, so we crash and burn. We give up, believe that we’ve failed or that the program doesn’t work, and we start another one. And so this process is repeated. To break out of that cycle, it’s vital to figure out your transformational danger zones (things that always throw you off track) and find strategies to deal with them. Once you do that, you will get dramatically better results from your fitness and nutrition program.

A sharp axe doesn’t do us any good if we don’t swing it.

Welcome to my life, my world, my passion. I am a wife, mom, personal trainer, entrepreneur, business owner, actress, fitness coach, and instructor. My ... END_OF_DOCUMENT_TOKEN_TO_BE_REPLACED